How I Got Here…

I posted something on Facebook the other day, with a couple of pictures (last year vs this year) and a brief statement that I’d gone from 324 lbs to 287 (37 pounds lost). A co-worker asked me how I’d done it, and I gave a short answer… which later I realized was far too short.

So what has changed?  What did I do to get here?

That’s a good question.  And there’s a lot to think about, and I probably won’t give credit where it’s due, but I’ll try.

First, I drew my line in the sand.  I was in the fight of my life, for my life, a fight just to survive.  My health was spiraling out of control, and I needed to do something, not just plan and think, but DO something.

I started going to the gym.  I got a membership at the YMCA, went there with a buddy (thanks, Prophet), and put my nose to the grindstone.

I logged every trip to the gym, with very few exceptions.  The only way you can see change is if you track it.

I started seeing some changes, added some muscle and lost some weight…. but I needed more.

I added racquetball to the mix, because it was fun and got me moving.  Even though Prophet (and later my son) kicked the snot out of me, I had fun.

I learned to sweat, and to enjoy sweating.  I learned that it was okay to huff and puff, to have to stop to catch my breath, because that pounding in my chest was my heart telling me I was still alive.

I found this awesome website jam-packed with information, called Nerd Fitness.  No pushy sales, no need to buy anything to get help.  It actually took me a while to figure out what there was to buy.

I started investing in my health: I gave up going out to eat every morning so I could afford a gym membership.  I asked for–and received–a membership to the “Nerd Fitness Academy”, a one-time fee that’s turned into the best investment I’ve made.

Logging stuff was a huge thing, so I finally took an interest in an awesome little app called My Fitness Pal.  I used it to track food intake, and to track carbohydrates, so I knew how much insulin to take.  Insulin and blood sugar levels have all been logged religiously in a cool little app called OnTrack by Medivo. 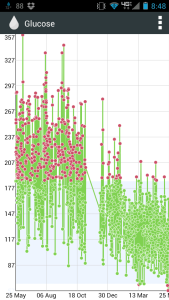 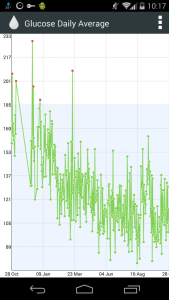 The graphs above show what tracking progress really means.  The one on the left has all the individual readings, while the one on the right uses daily averages.  They cover slightly different time frames, but that little gap–the funny little line between October & January–is when I started caring.  When things started turning around.  That was the end of 2013, into the beginning of 2014.

I started walking more.  I embraced the Walk to Mordor challenge, going so far as to start work on my own app to track it (yeah, it’s still in the works).

When my knees started giving me problems from walking too much (especially with stairs), I got myself a bike.  When I started, I could barely get around the block… now I feel like I’m slacking if I only get 15 miles a week.  I only feel really accomplished when I hit the 4 mile mark on a single ride, though I generally limit myself to an hour a night.

So that’s what I’ve got so far.

It wasn’t a simple thing.  It wasn’t some crash diet.  No “juicing” or 90-day crash diets.

I hope you enjoyed reading about it.  Feel free to ask questions or whatever in the comments below.